Developed in response to NATO requests for a compact but effective firearm for vehicle crews, support personnel, special operations, counter-terrorist units, and crew served weapon operators, the FN-P90 manages to excel in many of the categories FN-Herstal set out to achieve. The futuristic Personal Defense Weapon (PDW) / Sub-Machine Gun (SMG) entered production in 1990 and began service starting in 1991 and is continued to be used by militaries, law enforcement, and special operation groups around the world today. Chambered in the 5.7x28mm cartridge, the weapon far surpassed the 9x19mm weapons in performance and handling. The small caliber boasted greatly improved velocity at only half the weight of standard 9x19mm cartridges thus allowing the user to carry a great deal more ammunition into combat. Additionally, more rounds can be loaded into a magazine thanks to the cartridges relatively small diameter. Due to its incredibly high velocity, the 5.7x28mm cartridge fires at an exceptionally flat trajectory with roughly 30% less felt recoil which greatly improves accuracy even under fully automatic fire. The FN-P90's design came about after extensive ergonomic research; its small profile makes it ideal for tight, confined spaces as well as for personnel who require a concealable weapon. Featuring true-fully-ambidextrous controls, the FN-P90 is the first of its kind to be right handed and left handed shooter friendly without any modification or re-configuring of the firearm. The weapons charging handle, magazine release, and back up sights are symmetrically distributed on both sides of the firearm; the safety / fire control is located at the base of the firearms trigger which can be easily accessed with the thumb or index finger. The weapon also uniquely ejects spent casings downwards away from the users' face which makes for a much more pleasant shooting experience when needing to transition from left to right and vice versa.

This Krytac-produced P90 replica is a cut above the common P90 Airsoft AEG. Featuring creature comforts that those familiar with the platform would be happy to hear about; This P90 sports a Krytac gearbox, with their famous in-line MOSFET, standard 8mm bearings, automotive fuse, Deans battery plug, and quick change spring mechanism. The trigger mechanism now also works like the real P90, with a functioning dual stage trigger unit when the PDW is in full-auto. An enlarged hop-up door to accommodate the usage with gloves can be manually opened, or by pulling the charging handle to the rear will open the hop-up window, revealing a rotary hop-up. Brand new to the P90 is also a 200 round or 50 round convertible magazine that has a magazine cut-off function, making the gun cease fire when you are out of ammunition. If convenience is also your thing, the body of the this PDW also has a small hole, near the trigger grip that allows for motor height adjustment along with a removable gearbox plate, allowing one to access the gearbox for regular maintenance. The upper receiver also comes with individualized serial numbers laser engraved on the side, and an integrated front sight inside the optic mount, though there are also 2 side-mounted backup sights as a holdover from the P90 with the built in optic. 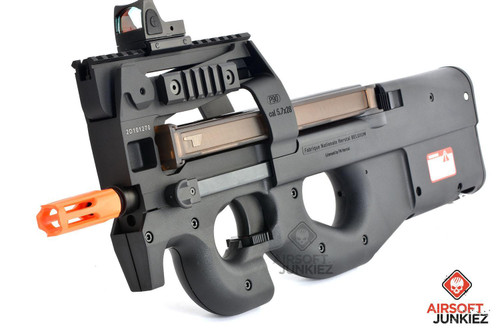 Certification code is not correct

To add this product to the cart, you must confirm that you have been certified.
Enter your certification code in the box below.